Michael’s first job in racing was working at the weekend as a youngster at a yard in Findon, West Sussex and at the age of 16 he started full-time employment as a stable lad for the trainer, Paul Howling.

A first stint working on Epsom Downs came at the age of 18 when Michael moved up to join the yard of John Sutcliffe.  When John retired,  Michael stayed in Epsom to work for Mark Dixon.  It was during his time with Mark, that the now 21-year-old Michael made his racecourse debut as a jockey.  He could have retired from riding unbeaten at that point, as his first ride was a winner over jumps at Folkestone.

When Mark Dixon moved to the US, Michael took a job with Gary Moore who was at that time still training in Epsom.  When Gary moved his operation down to the South Downs near Brighton, Michael went along and he had around 30 rides over the course of a couple of seasons.  Being quite tall, it was not long however, before riding weight became an issue for Michael as a jockey and he started to think about alternative careers in racing. 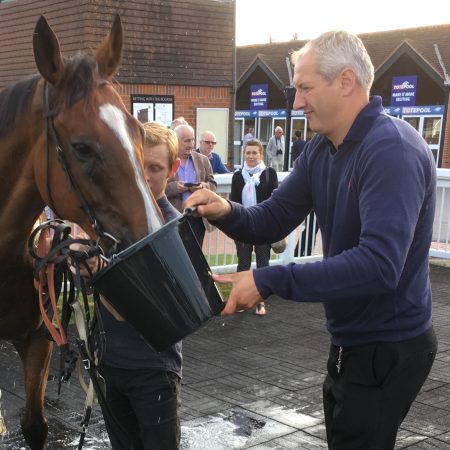 His first move in that direction came when he returned to Epsom to join Reg Akehurst as his 2nd travelling head lad.  When Reg retired and son John took over the licence, Michael graduated to become head lad at the yard where he stayed until getting his first chance to become a trainer.

Michael left Epsom for the Midlands where he took a job as a salaried trainer for a salaried trainer, a role he held for two years before deciding that he wanted to go it alone and he decided to take on a small yard just outside the major training centre of Lambourn.

He was only there for nine-months however, before the owner of the yard that he was leasing decided to sell and Michael was left looking for a new base.

It was at this time that the opportunity to come back to Epsom Downs arose.  After a short spell training from the racecourse stables, Michael was able to move into his current yard, Tattenham Corner Stables, where he has been based for over a decade.  The yard has room for around 40 horses and all of the training is done out on the Epsom Downs gallops.  There is a horse crossing over the road at the bottom of the yard driveway and the horses are straight onto the Downs.