My Brother was bought from the Autumn Horses In Training Sales at Tattersalls in Newmarket on 31st October 2017 for 21,000 guineas.  We felt that he was an exciting prospect, rated 82 on the flat, who could develop into a decent hurdler, capable of contesting some nice prizes.  He was sent to Neil Mulholland’s yard after purchase to prepare him for his debut in that sphere.

My Brother made his debut for us in July when 2nd in a maiden hurdle at Perth.  He was dropped back to 2 miles in August when 4th at Bangor.  We felt that he would not be seen to best effect until he raced on softer ground and so it proved when he was 3rd at the end of October at Fakenham when a stumble cost him the chance of a win.

The 2018/19 shareholding year seemed set to be an exciting (and possibly rewarding) one, and so it proved with a second place finish in a valuable novice handicap hurdle at Cheltenham in November.  He subsequently got stuck in the mud at Sandown and after another race at Fontwell, My Brother was found to have an injury which whilst not very serious would still necessitate an extended recovery period and he was unable to run again in the period.

Whilst the Cheltenham run showed that he is capable of competing at a higher level, the subsequent injury has affected his valuation and he enters 2019/2020 valued at £5,000.  He is expected to be back racing at the end of the current National Hunt season and therefore shareholders should get to see him back on the track during the current period and if he recaptures the Cheltenham form he will become a bargain buy. 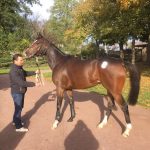